skip to main | skip to sidebar

The Great Flood of 2010 In Centerville 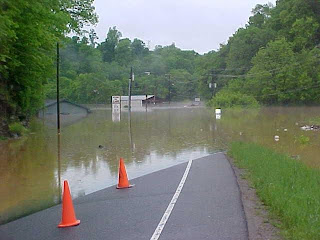 Well, I guess most of you have heard by now about the flood in Middle Tennessee this weekend. The Duck River in Hickman County escaped its banks once again. Although the likes of this flood has never been seen. According to one Nashville TV station, some areas in Hickman County received as much as 18 inches of rain over a two day period.
A picture of the river near Fish Camp restaurant shows just one area. Fish Camp is a popular restaurant in Centerville and is the building that you can only see the top of on the left. The picture was taken by Truman Borntrager. This photo was shared on Facebook by one of my friends, Sheila Wooten of KIX 96 radio station. I hope Mr. Borntrager does not mind me posting his picture, but I will give him a little advertisement. He is a local auctioneer with Coble Realty in Bon Aqua. So, If you need an auctioneer, give him a call.
Posted by Paul at 11:20 AM

if anyone in Centerville gets this, can you update me on the nursing home by the elementary school, and Hwy 50 East toward Columbia? I know there's no electricity, I haven't heard from my parents since yesterday AM.

We have family in Centerville and can't get a hold of anyone. We are looking for information about Lucille Noles, Becky and Robert Lockhart and family, and Jerry Parnell. They live off Beaver Dam Road. If anyone has information you can share please contact me at gretchmoser@yahoo.com

I am looking for Elizabeth@ David Hoover my cousins that live in Twomey.Know they were evacuted out but dont know where Wood like any information on them

Paul
As a Realtor with Crye-Leike, Realtors in Fairview, TN, I enjoy helping people find the perfect house. It is fun to watch their faces light up when the contract is finally signed and they know they can start packing to take part in the American Dream. If you are interested in buying or selling property in the Middle Tennessee area, or need a recommendation of an agent in your area, call me at (931) 670-5316 or(615) 799-6288.