skip to main | skip to sidebar

The annual Christmas parade will be held in Centerville, TN December 6, 2009 at 2:00 p.m. Join as dozens of floats, bands, horses, cars, and Santa make the trek around the Centerville Square. Be there to collect lots of candy that will be thrown out by the participants.

The East Hickman County Christmas parade will be held the following Sunday on December 13 from the East Elementary School in Lyles to the Highway 7 area. Sponsored by the Keg County Cowboys the parade will begin at 2:00 p.m. and will be fun for all.

Come on out and enjoy the fun at both of these Christmas events.
Posted by Paul at 12:23 PM No comments:

Santa Claus Is Coming To Centerville

The Senior Citizen Center in Centerville will host the 5th annual arrival of Santa Claus on the Grinder's Switch Express on December 12, 2009. Sponsored by the Hickman County Chamber of Commerce and the South Central Tennessee Railroad, Santa will arrive at 10:00 A.M. Everyone is invited to join the fun and welcome Santa to Centerville.
Posted by Paul at 5:48 PM No comments:

On November 11, at 11:00 on the Centerville, Tennessee Square, the people of Hickman County will observe Veteran's Day. Colonel Michael Petermen will address those in attendance. Just a few weeks ago, the 771st unit of the National Guard returned from service in Iraq. Their return makes this day extra special since they were gone a year.
Posted by Paul at 2:41 PM No comments:

Today is the grand opening of the Three Rivers Community Health Center in Lyles in the East Hickman County area. The clinic is a nonprofit organization and delivers medical care on a sliding scale which is based on the Federal Poverty Level.
According to information provided, U. S. census statistics show that more than 18.5% of people ages 18-64 have income below the U. S. poverty level and 20% lack health insurance. The addition of this clinic to the area will be a benefit to citizens that usually travel to Centerville, Dickson, or Columbia for medical care.
Posted by Paul at 10:56 AM No comments:

A Hickman County Times article on September 28, reminded me that the 28th annual "Centerville In The Fall Auto Show" rolls into town this Saturday, October 3. Admission is free. Registration is $20 per car and the cars will be judged in the afternoon. Prizes will be awarded at 4:00. It will be held in the parking lot of the Hickman County Justice Center and about 125 entrants are expected. Live music as well as a Minnie Pearl impersonator will complete the day.
Posted by Paul at 8:25 AM No comments:

Hickman County will host its fourth annual quilt show in Centerville, TN on October 2nd and 3rd. This year's theme is "Remembering Hearth and Home" and will feature Log Cabin Quilts among many other designs. Old and new quilts of all sizes will be shown.
The Quilt show is being held at the Centerville First Baptist Church at 100 Murphree Avenue and show admission and parking are free and open to the public from 12 pm - 5 pm on October 2, and 9 am - 4 pm October 3.
For further information, you can contact Ruth Ann Carathers at (931) 670-4998 or Bettye T. Griffin at (931) 729-5437.
Posted by Paul at 12:15 PM No comments:

According to Daryl Phillips, the director of the Hickman County Economic & Community Development Association, Hickman County once again earned the three-star certification from the state. This certification is given to communities that meet certain criteria that the state deems necessary for economic growth. According to Matthew Kisber the "ECD is proud to support Hickman County in its dedication to long-term economic growth and success.”
This is great! However, for several years in a row, Hickman County has received this certification and I have not seen very many changes that have been brought about because of meeting this criteria. While surrounding counties seem to grow without limits, we have changed very little in the last 20 years and very little because of meeting state criteria. But, at least Mr. Phillips had the opportunity to have his photo taken with the Governor.
You can read Mr. Phillips blog here: http://blog.hickmantn.org/2009/09/hickman-county-earns-three-star.html
Posted by Paul at 11:34 AM No comments:

Ed Bruce, co-writer of Mama's Don't Let Your Babies Grow Up To Be Cowboys, will perform at the Grinder's Switch Music and Arts Festival in Centerville, TN in Hickman County on September 12. He is scheduled to perform at 5:00 p.m.
The festival, which is always the Saturday after Labor Day, features many local and regional acts and begins at 10:00 a.m. with opening ceremonies. At 11:00 is the Grinder's Switch Hour, which is a local radio program that is live each Saturday morning.
There will also be plenty of fun and games for everyone to enjoy. So come on out to the Grinder's Switch Music & Arts Festival and enjoy the music.
Grinder's Switch is the place that Minnie Pearl always talked about in her Grand Ole Opry act.
Posted by Paul at 9:56 AM No comments: 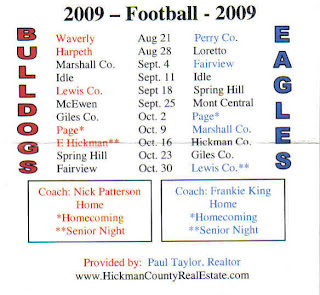 Whether you are looking to buy or sell real estate in Lyles, Centerville, Bon Aqua, or any other location in Hickman County or Middle Tennessee, give me a call and I can help you to find the home of your dreams.

The Revitalization Project of the Centerville, Tennessee Square is almost complete. For those of you that don't know, the square, in Hickman County, has undergone a complete transformation. No longer does one have to go around the square to get to the other side. Recently, Hwy 100 has been rerouted straight across the West side.

TDOT has also put up - not one, but two - traffic lights. One is located as you come up on the square from the Nashville side and the other is directly opposite. At first, it was a bit confusing, but as you get used to it, it is OK. According to the Hickman County Times, new lights were placed around the Centerville Public Square that makes it easier to see at night. The traffic lights were turned on last Thursday.

I remember when there was a traffic light in Centerville. It was many years ago and it seems that someone was always shooting it out. That was way back when Minnie Pearl had a restaurant there.

I like the way that the traffic is routed now. It makes it easier to get around Centerville; however, having owned a business on the Square, I think that rerouting may prove the death of small businesses there. Businesses had a hard enough time getting people to shop when they had to go around the square. Now people don't even have to look at the businesses on the East side. But, around here, small businesses have always had a hard way to go
Posted by Paul at 12:12 PM No comments: 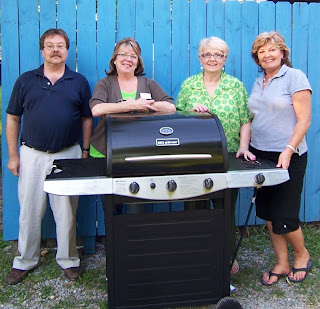 Karen Dodson of Lyles won a gas grill from the Crye-Leike, Realtors Office in Fairview. The office had a Memorial Day Promotion in which participants entered to win the grill.

Shown with Mrs. Dodson (2nd from right) are Realtors Paul Taylor, Sheree Rudd and Donna Hudson. The agents are planning to do other promotions in the future.

I have created a website for anyone that would like to buy or sell Real Estate in Hickman County. You can compare your house with others to see how much your house may be worth or you can find your dream home. You can also search the Multiple Listing Service (MLS) by location, price, or many other items. You can also sign up to receive updates when something new comes on the market that you may be interested in. Just click the link to be taken to http://www.HickmanCountyRealEstate.com and experience the ease with which you can now find the house that you want.
Posted by Paul at 12:09 PM No comments:

The Minnie Pearl Statue was removed from the Centerville Square. According to the original agreement, the statue could only be removed for repairs to the statue. The square is undergoing renovations and the statue needed to be removed and the one that spearheaded the campaign to have Minnie placed there, removed the statue to a nearby county. Most citizens hope that it can be worked out to bring the statue back to the square after the renovations are completed.
Posted by Paul at 9:12 AM No comments:

According to Taylor, who lives in Centerville in Hickman County, the average price of a house decreased from $112,000 in 2007 to $99,948 in 2008. Extreme values were removed so that the numbers would reflect the real estate market. The median or middle price also decreased 9.57%, while the total value of houses sold through the MLS system decreased a whopping 35.16%.

Taylor, who can be reached at (615) 799-6288 says that in order to sell a house today, it must be "priced to sell." Home buyers are aware of the real estate market and are looking for a bargain.

"If you want to sell your house, price it right the first time and make small repairs. That is the key to selling in this real estate market," Taylor said.
Posted by Paul at 12:23 PM No comments:

Paul
As a Realtor with Crye-Leike, Realtors in Fairview, TN, I enjoy helping people find the perfect house. It is fun to watch their faces light up when the contract is finally signed and they know they can start packing to take part in the American Dream. If you are interested in buying or selling property in the Middle Tennessee area, or need a recommendation of an agent in your area, call me at (931) 670-5316 or(615) 799-6288.